Well Done To Our Boys In Green 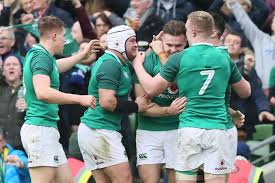 Ireland produced yet another powerful performance to wrap up the Grand Slam with a comprehensive victory over England at Twickenham.

After four wins from four in the NatWest 6 Nations, Joe Schmidt’s men delivered just the country’s third clean sweep, adding to the glories of 1948 and 2009.

A battle royale was predicted ahead of kick off and so it developed.

Ireland, as is now their trademark, kept possession, piled on the pressure and were rewarded with first-half tries from Garry Ringrose, CJ Stander and Jacob Stockdale.

A Conor Murray penalty was their only score in the second half but it was enough as Eddie Jones’ men fell to their third defeat in a row but St Patrick’s Day belonged to the Irish.

Ireland had made just the one change, while England had seven new bodies in their line-up.